Every person who becomes accustomed to reason metaphysically, to note and analyze the various claims of mortal sense presenting themselves at the gates of human thought, recognizes how insistent and persistent are their demands for recognition. Not periodically and intermittently, but regularly and continuously, do the claims of matter present themselves. Their purpose—if falsity and illusionment may be so dignified—apparently is to occupy human consciousness to the exclusion of the facts of being, the Christ, Truth, which is always knocking at the door of thought. The Christlike thought is always ready to enter to the exclusion of evil visitants, the choice of mental guests being wholly the prerogative of the individual. Mrs. Eddy, in speaking of the need for teachers to show their students the evil tendency of malpractice, says, under the marginal heading, "Indispensable defence," in "Science and Health with Key to the Scriptures" (pp. 451, 452): "Instruct him [the student] how to bar the door of his thought against this seeming power,—a task not difficult, when one understands that evil has in reality no power."

Perhaps no tendency in the practice of Christian Science is more common than response to the suggestion of mortal mind to yield to the very human temptation to accept less than the highest demonstration, as complete and decisive victory over the claims of evil, and to excuse one's self for failure to bring out the final, complete demonstration of health, harmony, and spiritual regeneration,—the goal of every earnest worker in Truth's vineyard. The temptation to excuse, however, is no less acute than that other temptation, scarcely less reprehensible,—to accuse one's self wrongfully, thus coming under the ban of condemnation. It were as if good and evil were met to argue with each other; yet there can be no argument between good and evil, since evil is nothing, an illusory belief; so good alone holds the ground. "Suffer it to be so now," is the shield behind which error would artfully invite every practitioner of this religion to quietly abide, in the assurance that all has been done that could be done to meet a given need. What more effective allurement could error attempt to hold up before the yearning gaze of the spiritual healers? 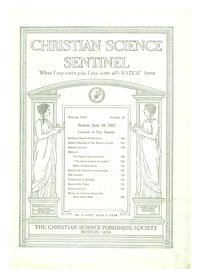