In view of the apparent interest manifested by the public with reference to world disarmament, perhaps it would be well to consider some of the metaphysical facts which underlie this important subject. A careful study of the true meaning of what is termed desarmament, together with the commonly accepted definition of it, discloses the fact that disarmament, like most other important questions, has its counterfeit in the so-called mortal mind.

Disarmament is a word derived from the verb disarm, which in turn is composed of two syllables: dis, meaning separation or negation, and arm, meaning a weapon of defense or offense. Disarmament therefore would mean a separation or negation of the weapons of defense or offense employed by that which is armed. Now there is nothing that is offensive or needs to be defended but so-called mortal mind and its belief of life, substance, and intelligence in matter. Therefore any disarmament must essentially take place in this mind, and is done by the separation or negation of the weapons which it wields to defend and promote the lie about itself. These weapons are engendered and projected by this base deceiver itself and are expressed as fear, lack, distrust, dishonesty, lust, hate, revenge, and the like.

Send a comment to the editors
NEXT IN THIS ISSUE
Article
"Son, thou art ever with me" 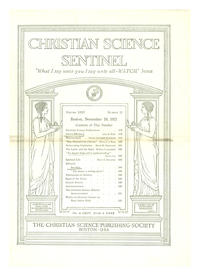