Amidst the confusion which arises from varying opinion as expressed in conversation, in books, and in daily papers, there must surely be some thought, some opinion, which is right in every question, some absolute truth which ought to be easily discovered and which, when discovered, would be generally accepted and would at once put an end to all dissensions and differences. That such a discovery would be beneficial there can be no doubt. No one wants to be always in error and no one wants to be constantly in a state of doubt. Now, Mary Baker Eddy, the author of the Christian Science textbook, "Science and Health with Key to the Scriptures," writes on page 469 of that book these words: "The exterminator of error is the great truth that God, good, is the only Mind, and that the supposititious opposite of infinite Mind—called devil or evil—is not Mind, is not Truth, but error, without intelligence or reality." This is a very definite statement, but nevertheless a hard saying, for if there is one thing that a man feels certain about it is that he thinks for himself and has a mind of his own.

Let us see whether we can understand and accept this strong statement of truth. Every thinker will have to concede that thought force is the only force there is. It is seen to be not only the basis of all physical action but even to have a power apart from any material manifestation; but, whilst many will say that this force emanates from a human brain or so-called mind and others that it comes partly from a man's mind and partly from God, there are few who will say that all thought comes from the one Mind, God. They simply deny that God is omnipotent, all power. 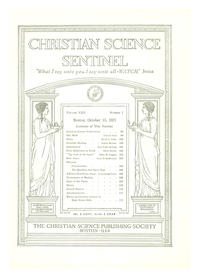