In all ages the crime of false witness has been regarded with peculiar detestation. Christ Jesus, teaching his disciples, numbered it with evil thoughts, murders, adulteries, fornications, thefts, and blasphemy. The catalogue is sufficiently comprehensive and significant. But false witness is, of course, merely a phase of lying, and the writer of the Book of Revelation describes the fate of liars as the lake of fire and brimstone, which is the second death. In the same way, Mrs. Eddy, on page 67 of "Miscellaneous Writings," says the Ninth Commandment, " 'Thou shalt not bear false witness;' that is, thou shalt not utter a lie, either mentally or audibly, nor cause it to be thought." The meaning of all this is perfectly clear. Anybody who thinks that he escapes the charge of false witness, by not actually bringing an accusation which is untrue against his neighbor, has the very slightest perception of what the commandment really means. Like all the commandments, when understood, it casts its net wide, and it is just as well not to become entangled in it.

When anybody sets to work to analyze Mrs. Eddy's definition, "Thou shalt not utter a lie, either mentally or audibly, nor cause it to be thought," the comprehensiveness of the direction must become manifest. It is only another way of saying that the individual must not only speak but think absolutely truly; for a lie, when you consider it metaphysically, is something much more than a merely untrue statement, it is any statement which contradicts absolute Truth. This is not to say that the man who makes an unscientific statement in absolute ignorance is in the same category with the man who deliberately lies about his neighbor, but it does mean that even the man who ignorantly makes an untrue statement is declaring that two and two are five, or fifty, or anything else, and that he is inevitably bound to reap the result of this. When, of course, he has embarked on a course of lying which is sufficiently vicious and deliberate, the penalty necessarily increases, and it is then that he endangers himself in the waves of what the writer of Revelation calls the lake of fire and brimstone. 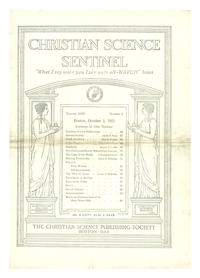