Christian science differs from ordinary religious teachings, in that it demands proofs of the operation of the truth it offers. An understanding of Principle rather than dogma, demonstration rather than mere profession of beliefs is demanded. Doctrine, no matter how true, is of little avail to the individual except the individual make some effort to prove its utility. It is in this effort toward demonstration that the Christian Scientist is sometimes confronted by what the world calls failure; but even then it is often much less of a failure than can be understood by one who has never made the effort, and there is no failure quite so inexcusable as failing to try. The teachings of Jesus must be perceived through spiritual understanding, that the truth of his words may be demonstrated in deeds. This understanding must unfold to the human mind gradually, for, in the words of Isaiah, "precept must be upon precept, precept upon precept; line upon line, line upon line; here a little, and there a little." And so, until thought has been thoroughly spiritualized, there remains the wavering faith between understanding and belief, between success and failure.

When Jesus of Nazareth stood before Pilate and uttered these words: "To this end was I born, and for this cause came I into the world, that I should bear witness unto the truth," Pilate asked him the question which has echoed and reechoed down through the centuries: "What is truth?" but it is not recorded that Jesus made any reply. For three years he had been daily answering this very question. From the first day of the temptation in the wilderness, where he fought the battle between the flesh and Spirit which ended so decisively on the side of Spirit, he had been voicing and proving to the world the great metaphysical facts which he had first proved for himself; he had indeed been bearing "witness unto the truth." Now he was about to crown his earthly career with the greatest victory of all. He was to bear witness to the great fact that man in the likeness of God is at one with God, inseparable from Him, as Principle and idea, as Mind and its manifestation; yet in the very hour of his greatest triumph, there were the bigoted scoffer and the arrogant materialist who no doubt considered his three years' ministry an abject failure. Not so, however, those who were spiritually minded enough to behold the risen Christ; they knew he had not failed; and those who in all time behold this appearing know that divine Science did not then fail, that it never has failed, and never can fail. 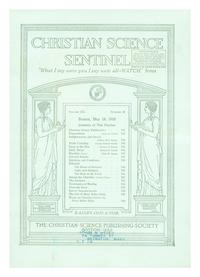