We are all familiar with the thought of temples as expressed in human experience past and present, although we perhaps have not often paused to realize that a temple points to something above and beyond the material structure; that rightly understood it symbolizes a spiritual idea which is imperfectly understood if recognized at all by mankind. Too often has a splendid temple called forth little except pride and personal satisfaction, as for instance where Jesus' disciples called his attention to the temple at Jerusalem which, as they said, was "adorned with goodly stones and gifts." His only comment apparently was this: "As for these things which ye behold, the days will come, in the which there shall not be left one stone upon another, that shall not be thrown down."

To the more spiritual thought of that time, or indeed of any time, a temple was a place in which to worship God, and we find St. Paul seizing upon this thought and applying it to the human embodiment. In the sixth chapter of I Corinthians he gives a severe rebuke to moral impurity and asks, "Know ye not that your bodies are the members of Christ?" and then he goes on to say, "Know ye not that your body is the temple of the Holy Ghost which is in you, which ye have of God . . . therefore glorify God in your body, and in your spirit, which are God's." This was undoubtedly taking a long step forward on the part of those who had been accustomed to think of themselves and others largely as the votaries of sensual pleasure, and it seems that even after they began to accept Christianity, possibly after they had felt its healing influence, they were yet enticed by the evil tendencies of the flesh, which really means of mortal mind. How wonderful then it must have been for them to think even of their bodies as temples for divine service into which nothing impure could enter and from which consequently nothing impure could go forth. Alas for it, that this lofty ideal of consecration has so been lost sight of throughout the centuries until the present hour, when through the healing ministry of Christian Science its appeal is even more insistent than at any time in the past. 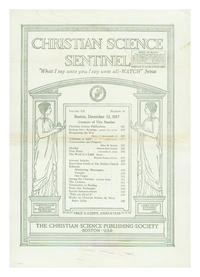