How frequently the spirit of restful confidence finds expression in the psalmist's references to God as a "rock," as the immovable basis of faith, assurance, and joy! In all the exigencies of temptation and distress this fact is ever recognized as the one sure thing, the eternal refuge. Thus we find him saying: "My soul, wait thou only upon God; for my expectation is from him. He only is my rock and my salvation." This also recalls the Master's words to Peter respecting that apostle's recognition of the Christ,—"Upon this rock I will build my church."

This Scripture concept of the basis of faith was recalled recently by one while standing in the presence of the famous Woolworth Building in New York. The vastness of its towering sweep at once prompted wonderment how any foundation could have been devised which would prove equal to the support of such an enormous structure. Then he was told how a great gulf had been excavated in the earth, until the mighty ledge upon whose shoulders even the Himalayas would prove but a feather's weight, was uncovered, and that upon this there was built a great steel and concrete substructure, which is unburdened even by so enormous a load, because the planet itself is supporting it. 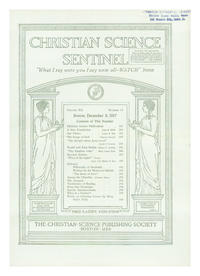