A local revivalist makes the charge that the fad and sham...

A local revivalist makes the charge that the fad and sham religions of today are the influences of hell which are trying to lead people down the paths to the lower world, that the majority of their members either become insane or infidels, and a further charge that Christian Science is such a religion.

Christian Science is essentially Christian, and involves the acceptance and practice of the teachings of the Master. It declares the infinity of God and His three principal attributes, omniscience, omnipotence, and omnipresence,—God possessing infinite wisdom and intelligence, infinite power, and being ever present. It accepts and demands the practice of the ten commandments, and lays particular stress upon the first, "Thou shalt have no other gods before me." Its essence is the Sermon on the Mount, and all of its adherents not only accept but strive to live these sayings of Jesus. It declares the divine mission of Jesus and accepts him as the Way-shower, in accordance with his own statement, "I am the way, the truth, and the life." It accepts and teaches the divinity of the Christ, and the doctrine of the atonement,—the at-one-ment of God and man here and now; and finally, it not only believes in the efficacy of prayer but it proves that prayer is answered, the proof being the healing of sickness and the overcoming of sin in human experience.

Send a comment to the editors
NEXT IN THIS ISSUE
Article
A clergyman as reported in the Graphic, speaking of Christian Science,... 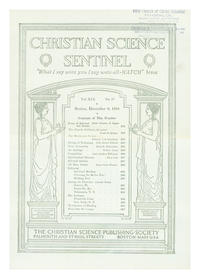