My attention has been called to issues of your valued paper...

My attention has been called to issues of your valued paper in which there appeared accounts of lectures delivered by the Rev. Mr.—,in which he took occasion to denounce Christian Science. It is stated that "Doctor — read the Scripture passages which clearly foretold that at the end of this age there should arise those who should teach false doctrines and doctrines of demons;" and further: "This age is now upon us. We are surrounded by these delusions. He then named them, Christian Science, Russellism, theosophy, spiritualism, etc." A favorite method with some critics, for the purposes of their criticism, is to read into Scripture passages meanings which were never intended to be there, without due consideration as to whether the resultant criticisms are valid or otherwise.

The interpretations of Scripture are many and varied, and the tendency is for each individual to consider his particular interpretation as the correct one. This has led to much by way of intemperate and unwarranted denunciation of the views of others, which views may perhaps more clearly accord with the real meaning of Scripture than those entertained by the critic. There is a very positive basis upon which may be determined the accuracy of one's interpretation of Scripture, namely, that given by Jesus when he said, "By their fruits ye shall know them." The arbitrary statement that Scriptural passages relating to "those who would teach false doctrines" are applicable to Christian Scientists, is pure assumption and altogether incapable of proof. In fact, the proof is on the other side. The effect of the Christian Science teaching upon the lives and characters of those who have embraced such teaching, is such as to preclude the possibility of this arraignment being true. Just what the "doctrines of demons" may be is an open question. It is certain, however, that this term cannot properly be applied to Christian Science or its teachings.

Send a comment to the editors
NEXT IN THIS ISSUE
Article
In a recent issue the Rev. Mr.—is quoted as saying... 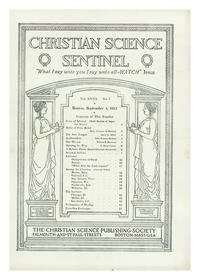