When a person who can write the word Reverend before...

When a person who can write the word Reverend before his name, advertises an attack on Christian Science and uses such language as you have just reported, the probability is that the Christian Science church of that vicinity is growing. But the abuse of a religion or its founder never turned a thoughtful man away from it, and no one who is ready to consider the merits of Christian Science is likely to accept voluble vituperation instead of intelligent information. Vilification proves nothing against any one or any thing, except the person who resorts to it; and the only reason or argument furnished by the speaker whose declamation you published was a palpable fallacy.

For the purpose of proving something against Christian Science, the speaker related an incident which contained its own refutation. The story was that a native of India, by name Pundita Ramabai, was told of Christian Science when she came to America, and she recognized it as an ancient Indian philosophy. The nature of the information furnished to this lady was not stated, but it can be gathered from her explanation of the philosophy which she identified with Christian Science. She said: "It means just this: the philosophy of nothingness. You are to view the whole universe as nothing but falsehood. You are to think it does not exist; you do not exist; I do not exist; the birds and beasts that you see do not exist. When you realize that you have no personality whatever, then you have attained the highest perfection of what is called 'Yoga.'"

Send a comment to the editors
NEXT IN THIS ISSUE
Article
Some of the statements made by Dr.—in the course of... 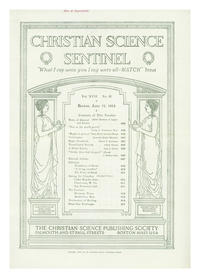