"To err is human, to forgive divine," Pope said, and he was right. It is the so-called human or carnal mind that errs, because it is "enmity against God," while the Mind that inspires with forgiveness must be capable of destroying all enmity. Mrs. Eddy tells us that "the destruction of sin is the divine method of pardon" (Science and Health, p. 339). In Christian Science pardon and forgiveness are one. Outside of Bible usage the word pardon is often used in a more limited sense. Thus "the executive may pardon, but has nothing to do officially with forgiving," says Fernald. God's forgiveness of any error must be the absolute destruction of the error, leaving nothing to be pardoned or condoned, since the infinite decree is, "I am God, and there is none else."

The prerequisite of forgiveness is the surrender of selfwill. Until human will is silenced the divine does not find expression in individual consciousness, and only the action of the divine can destroy a false sense. Hence the need of expressing the divine nature if one would reflect the right idea of forgiveness. Human nature is burdened with erroneous theories and beliefs, with wrong thoughts, all at enmity with God, or good. It does not know what forgiveness means. There was a remnant of this false human nature in the consciousness of Peter when he said to his Master, "Lord, how oft shall my brother sin against me, and I forgive him? till seven times?" and Jesus answered, "I say not unto thee, Until seven times: but, Until seventy times seven." From the reply of the Master it is evident that he wanted to make it very clear to Peter that forgiveness was a constant and not a variable quality. Then he went on to bring out the lesson that it must be "from the heart" and not alone from the lips. Forgiveness must be felt within the affections, else it is not genuine. 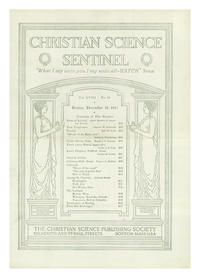