Emily M. Christian with contributions from A. C. Spinti

I had such a glorious proof, in the year 1911, of the all-sustaining power of Truth as revealed through Christian Science, that I feel impelled to tell of it, with the hope that it may give fresh courage and help to some one passing through a like experience. On Christmas day, 1910, a member of my family was taken seriously ill. From that time till quite the end of the summer, it was one great anxiety, entailing a strain so intense, both physical and mental, that without Christian Science I must have broken down under it. For the first five months I either had to rise at three in the morning or did not go to bed until that time, and then was liable to be called at any minute; indeed, for one week of the time I never went to bed at all, but took what snatches of rest I could through the day. I was in constant attendance in a sick-room under peculiarly trying conditions. I had the full direction and management of a large house, a household of eleven people, including two hospital nurses. I had to take over and get some grasp and understanding of money and business matters, of which I was quite ignorant. I seldom could get out of doors, and never for more than half an hour.

The strain was great, but I came through without a break, having indeed proved the truth of Paul's words, "I can do all things through Christ which strengtheneth me." I do not mean to imply that I did not many times feel the strain, but Truth ever upheld me. On two occasions, in those weary night vigils, when I had a feeling that I could endure no longer, there quite suddenly came to me so clear a realization of God's all-presence and power that all sense of exhaustion left me, and I felt as fresh as though I had just got out of bed. This proves to us the truth of the prophet's words, "They that wait upon the Lord shall renew their strength."

Send a comment to the editors
NEXT IN THIS ISSUE
Testimony of Healing
I would like to tell what Christian Science has done for... 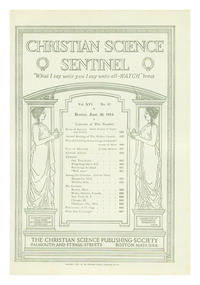