The right side to any question is the only side that can honorably be taken. The wrong side in its very wrongness condemns itself as unworthy and untrue, and honesty forbids that any one should champion it. In her sermon entitled "Christian Healing" (p. 10), Mrs. Eddy points out that "there is but one side to reality, and that is the good side." The good side is God's side, and is the only right side in any case, and there can be no reasonable excuse for not taking it. There is certainly no warrant for talking on the wrong side after one has been sufficiently enlightened to know where the truth lies. Mistaught as to the nature of Life, the origin of man, and the laws of God, mortals usually, and in a sense naturally, take the wrong side of things, and so come under the influence of what they would be glad to avoid. Even Christians are sometimes led to argue on the side of evil instead of on the side of good, for error rather than against it, and then perhaps wonder why they are not more successful in overcoming it.

Christian Science is teaching humanity the better way. It places man always on the side of God, which, in relation to human experience, means that man is rightly on the side of health, happiness, and success, on the side of holiness and everlasting life. It means that we should never in word or thought take the opposite side to what is good and perfect. Despite the accumulation of false testimony, we should not plead guilty to error except in the case of wilful and conscious wrong-doing, and then only long enough for repentance and reformation. Evil has neither authority nor power to command our allegiance or our fear. It cannot compel us to honor its claims or come under its yoke. It would be considered poor policy in worldly matters to argue on the side of one's opponent, and it is even poorer policy in spiritual things, for it confers a sense of power where we least want it to be. If we are convinced that man is the child of God, hence good and perfect, we can at least remain faithful to that conviction in what we think and say. 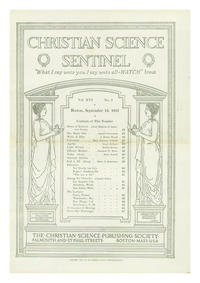