In using the word "fundamental" in the caption of this article it is the intention to show that the religious rights of man and woman are what the Standard dictionary declares as the meaning of that word: "indispensable; primary; essential;" based on a "principle; a primary and necessary truth." The right of all men and women to choose and enjoy the religion which seems to them best suited to their spiritual aspirations and needs is, in the human economy, an inviolate right of choice; a human approximation of divine Principle, a manifestation of justice which has its root and vitality in infinite Truth.

Of the natural liberty to pursue individual well-being, which is the birthright and the abiding right of every man and woman, Alexander Hamilton, one of the great patriots of the Revolutionary period of American history, wrote the following fine sentiment (we quote from "The Works of Alexander Hamilton," edited by Henry Cabot Lodge): "The Deity, from the relations we stand in to Himself and to each other, has constituted an eternal and immutable law, which is indispensably obligatory upon all mankind, prior to any human institution whatever. This is what is called the law of nature, 'which, being coeval with mankind and dictated by God Himself, is, of course, superior in obligations to any other. It is binding all over the globe, in all countries, and at all times. No human laws are of any validity, if contrary to this; and such of them as are valid derive all their authority mediately, and immediately, from this original' (Blackstone). ... The sacred rights of mankind are not to be rummaged for among old parchments or musty records; they are written as with a sunbeam in the whole volume of human nature by the hand of Divinity itself, and can never be erased or obscured by mortal power."

Send a comment to the editors
NEXT IN THIS ISSUE
Article
WHAT DO WE MEET? 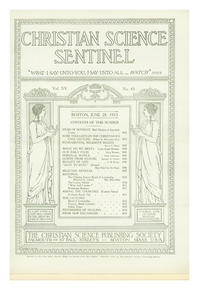