I want to tell of the wonderful way in which I experienced...

I want to tell of the wonderful way in which I experienced God's help. Since earliest childhood I had been sickly, and my condition grew worse each year. No physician seemed able to determine the nature of the trouble, and all prescribed remedies failed to bring relief. Then an operation was advised, to which I consented, hoping that a cure would result. The operation was performed, and a few weeks later I returned home, after having suffered much pain because of complications which had arisen. My condition seemingly improved, and I was again able to work. A few years later I had a return of the former complaint, to which was added a severe nervous trouble, accompanied by such weakness that I would often have to lie down the greater part of the day. I was advised to go to a sanitarium, which I did, but returned home no better, and greatly weighed down mentally, having lost all hope of recovery and not knowing what to expect.

At this juncture I heard of Christian Science, and read some literature on the subject, which impressed me to such an extent that I immediately made up my mind to seek help in that direction; and when a few weeks later it became possible for me to go to St. Petersburg, I applied for treatment to a Christian Science practitioner. I shall never forget the sense of happiness and the feeling of hope which I experienced after seeing her. She took up treatment in the most loving and patient way, and my condition slowly improved. To be sure, there were hours of discouragement, when a turn for the worse would seem to take place, but Truth was victorious in the end, and the words, "They that wait upon the Lord shall renew their strength," became true in my case, for God gave me strength to overcome the disease.

Send a comment to the editors
NEXT IN THIS ISSUE
Testimony of Healing
I desire publicly to express my gratitude to God, also to... 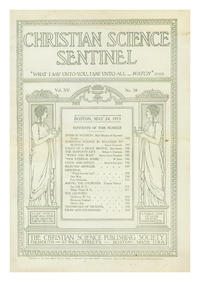