My heart goes out in loving thankfulness to our beloved...

My heart goes out in loving thankfulness to our beloved Leader for teaching me to realize that the truth makes us free. Mental and physical suffering had enslaved me from early childhood, and added to this was a longing but fruitless search for a practical, demonstrable explanation of St. John's declaration, "God is love." Many devoted and faithful members of churches attempted to console me by saying that my physical suffering, and my mental distress because of "man's inhumanity to man," with all the awful calamities which I constantly saw about me, were but the manifestations of divine power, and were intended to prove God's unchanging, compassionate, infinite love. I had always believed that to love meant to cherish, to help, to protect, to sacrifice for, and so I still maintained my faith in Him, realizing that my sufferings did not and could not emanate from the loving Father, but from my own failure to understand Him.

It was at this crisis, when death seemed to be the only relief, and preferable to a hopeless existence with what was said to be organic heart trouble, diseases of the lungs, liver, stomach, and bowels, nervous exhaustion and consequent depression and sleeplessness, spinal disease, and even other disorders, that the first ray of light pierced the gloom enveloping me. A dear Christian Scientist, recently healed of spinal disease and of a dreaded skin disease, asked me if I did not believe God to be omnipotent. When I replied in the affirmative she again questioned me, "Can He not, then, heal you?" I did not reply so quickly this time, for I was forced to think. Either I must give up my belief in His omnipotence or admit that I could be, nay, was healed. That night as I lay sleepless, though not in the old turmoil and fear, I suddenly seemed to see myself as I really was to mortal sight, and I was not proud. All the bitterness, self-pity, self-justification, self-love, self-righteousness, the "ingratitude of barren lives" (Science and Health, p. 4), rose before me, and in clear contrast the wondrous patient love of God stood revealed, until the room seemed filled with light, and again I heard the song of peace and good will, sung by angel voices nearly two thousand years ago to the shepherds of old as they watched their flocks on the Judean hills.

Send a comment to the editors
NEXT IN THIS ISSUE
Testimony of Healing
I have long felt that I should give my testimony to the... 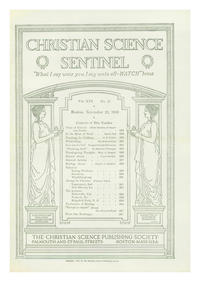