Mrs. Eddy's interpretation of some doctrinal points may...

Christian Science does not teach that the ills which beset us are only imaginary. Mrs. Eddy says in Science and Health (p. 460), "Sickness is neither imaginary nor unreal,—that is, to the frightened, false sense of the patient. Sickness is more than fancy; it is solid conviction. It is therefore to be dealt with through right apprehension of the truth of being." Jesus proved the unreality of sickness and sin by destroying them, and when Christian Scientists speak of sin and sickness as unreal, it is equivalent to saying these things were never created by God, they are absolutely unlike Him; therefore they are not eternal, or in other words not real. While these things seem to form a part of our daily life, Christian Science teaches that in proportion as we attain to the Mind that was in Christ Jesus, we shall be able to gain the mastery, even as he did, over sin and disease and all other things which are opposed to God's government.

Send a comment to the editors
NEXT IN THIS ISSUE
Article
In a recent issue the Rev. John W. Greenwood is reported... 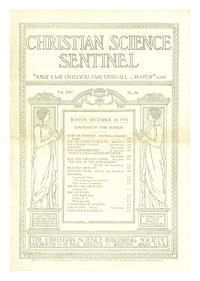