Respect for the spiritual independence of one's neighbor, honor for him in the exercise of his right to seek out his own answers for his own soul's questions; sympathy in other men's struggles with doubt and strivings after light; gentleness and helpfulness toward those who seem to be departing from the truth; generosity and fairness toward those whom conviction calls one to oppose—whoever has not attained to these graces comes obviously short of being yet a thoroughly good Christian. And this general principle was exactly as true in the sixteenth century as it is in the twentieth. The men who were intolerant then—the men who fought and persecuted such as differed from them in belief—were in this degree not good Christians. And men who have it in their temper to do the same thing today are not good Christians any more than their prototypes were. When the Lord Jesus rebuked those disciples who would have called down fire on the heads of the inhospitable Samaritans—when he reproved them again for interfering with the man who, though not of their company, was yet casting out demons in the Messiah's name—he set an unalterable standard for his church. It is the business of the power of Christ to overcome the world and to conquer the flesh. Where it has free course to be glorified in any life, it will create toleration in spite of all obstacles. 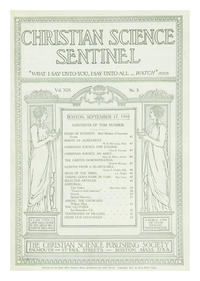