The United States circuit court of appeals sustains the action of the United States district court for the northern district of New York, dismissing three petitions in involuntary bankruptcy which were filed by creditors against three heating and lighting companies. The decision of the higher court reads in part as follows: "By reason of the circumstance that they are given the authority with—to a certain extent—the right of exercising eminent domain, they are correlatively charged with a duty to the public which is no part of the obligations of ordinary corporations engaged in manufacturing, trading, printing, publishing, mining, or mercantile pursuits. And as a result, when financial adversity overtakes them, there are interests which have to be considered other than those which require attention when ordinary corporations of the enumerated classes become insolvent. In the case of a public utility corporation, such as these, the public itself, the community in which the corporation is rendering service, has a right superior even to creditors of every class, and which right cannot be extinguished by the payment of a dividend in money. Moreover, the public safety and comfort imperatively demand that, whatever else may happen, the corporation, devoid of ready cash though it be, shall not make default on the public obligations with the result of plunging the community in darkness or stopping the transportation of passengers, and that in some way or other the public service shall be rendered while the financial affairs of the company are being wound up."

President Taft's speech at the banquet of the American society for the judicial settlement of international disputes came as a surprise to the many distinguished persons as they listened to the very plain words in which be made known his dissent from the alarmist views that have recently been freely circulated. He took direct public issue with the general staff of the army, which had prepared arrays of figures and strategic arguments in favor of a greater army, and also with Secretary of War Dickinson and Gen. Leonard Wood, who had indorsed the general staff in the suppressed reports to the House. The President gave the opinion that a hostile army would have some difficulty in crossing three thousand miles of ocean on one side and five thousand on the other, especially with the American navy keeping watch. He thought that a little attention by Congress to the needs of the present establishment and some few measures of expansion would leave us in a safe condition. 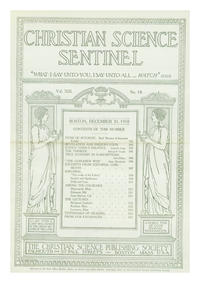