The secretary-treasurer of the Postal Progress League says: "Under the legislation proposed by the league the posting of two four-pound parcels a year by the average of our 80,000,000 population would give the post-office an income of over $50,000,000 from its general merchandise traffic alone (in 1907 the income from this part of the service was but $8,000,000). The posting of one four-pound parcel a year per head of our 28,000,000 urban population in the new local sealed parcels service would add about $9,000,000. Estimating the needs of the average rural family to require the mailing of but one suitcase packet a week to and from the post town and the home, the postal income from the new rural service—4,000,000 families—would be over $40,000,000. The enactment of this bill into law would eliminate the long continued postal deficit; it would go far to relieve the public from the extortion of our private express companies." The bill provides for a reduction of the one-cent an ounce postal rate on merchandise to one cent for two ounces, the old rate of 1874; a local letter post, four ounces for two cents, each additional ounce one cent, the general letter rate of Great Britain; a local service on the rural routes, all matters in one class, parcels up to 1 by 6 by 12 inches in bulk, one pound in weight, one cent; larger parcels up to 6 by 12 by 12 inches in bulk, eleven pounds in weight, five cents; larger parcels up to 6 by 12 by 24 inches, the capacity of the ordinary suitcase, or one cubic foot, and up to twenty-five pounds, ten cents.

Prof. Percival Lowell has discovered oxygen in the atmosphere of Mars. This announcement comes almost on the moment of the confirmation of Dr. Lowell's declaration of last year of water vapor in the atmosphere of Mars. The original announcement was made a year ago in consequence of observations made some time before, while the confirmation is in consequence of a special expedition to the summit of Mt. Whitney made by Dr. W. W. Campbell, director of Lick Observatory. 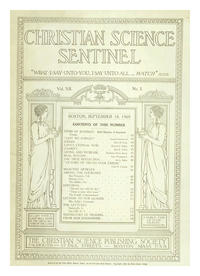