THE LIBERALISM OF CHRISTIAN SCIENCE

When our Master was asked by a certain lawyer, "And who is my neighbor?" he told him the story of the good Samaritan, showing that Jesus appreciated the good wherever it was found, irrespective of creed, dogma, or man-made theologies. Likewise is a student of Christian Science impressed with the liberal and rational view taken by Mrs. Eddy, the author of "Science and Health with Key to the Scriptures." On page 361 of this book she gives credit to the Jew for being a monotheist,—having one omnipresent God; on page 238 we read about the faith of the Catholic girl who lost her crucifix, and on page 164 the author refers to the cultured class of medical practitioners as "grand men and women." One cannot fail to recognize the generous and kindly qualities of this real Leader, since all her work tends to uplift humanity; never to condemn or to destroy.

Nearly all who have come into the fold of Christian Science were formerly members of one creed or another; some were unbelievers, and perhaps sincere at that. The father of the writer was an orthodox rabbi, his oldest brother is a Jewish minister, and another brother is a medical doctor, and I say with deepest respect for them that they are sincere in their beliefs. Nevertheless, if they were to take up the study of Christian Science they would become more liberal, they would understand more about the true brotherhood and the one fatherhood. When any one applies for help in Christian Science the practitioner does not ask what religious label is attached to the applicant, but rather his aim is to make the patient understand that we are all children of one Father, and that this Father gives to all alike if they come to Him. This rational view, when understood by the newcomer, helps him to look with compassion upon those who are still enthralled by man-made dogmas and creeds, and he is liberal, for he knows they need help and not ridicule. So, with a heart overflowing with joy, he thanks the giver of all good for having revealed to the world this healing truth through our Leader, who teaches us by precept and example how to become true followers of Jesus the Christ.

Send a comment to the editors
NEXT IN THIS ISSUE
Poem
"THE DARKNESS IS PAST." 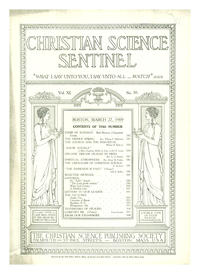