Next to the decision depriving corporations of the privilege of immunity for witnesses, handed down last week, the most important judicial event of recent weeks, says The Literary Digest, was the decision, given also last week, in the Chicago street car controversy. The companies held that the act of the Legislature in 1865, extending their franchises for ninety-nine years, gave them the right to continue operation irrespective of their contractual relations with the city. The court approved the validity of the franchises, but held that the use of the streets was a question of contract with the city which was not bound by the terms of the franchise grant.

The right of a railroad company to compel passengers to retain hat checks given in exchange for tickets and to produce them upon demand, is denied in a decision made last week by the Appellate Court at Bloomington, III. Two men traveling from Chicago to St. Louis and Chicago to Alton were ejected from the train because they refused, upon demand by the conductor, to produce the checks given them in exchange for their tickets. They sued and were awarded $500 damages, the action of the jury of the lower courts being sustained on appeal to the Appellate Court. The railroad company will carry the case to the State Supreme Court. 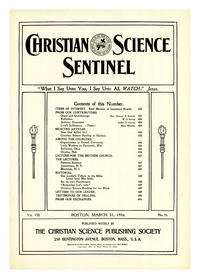