One notable feature of advancing civilization is the demarcation between established fact and mere conjecture. The former is classified under the head of science; the latter might be loosely included under that of superstition. Education is constantly tearing away the threadbare garments of superstition, and the cry for scientific fact in place of foolish fable is heard in every field of research. Indeed, so strenuous has been this call, that the dangers of modern ultra-criticism have threatened to exceed those of ancient erroneous belief.

Nowhere has superstition held its ground more firmly than in the religious world. From time immemorial religion has been based largely upon intangible beliefs, and even now it seems reluctant to leave this realm of tradition for the realm of the real. Singularly enough, too, superstitions (which might be broadly defined as unprovable supposition) have not been confined to the unlettered. It was a highly cultured race that accepted the teachings of mythology. To this people Jove actually reigned in Olympus, and Athene truly sprang from his head. Even as late as the fourteenth century the learned Dante accepted literally what to us are the wildest phantasms. We laugh at these old-time delusions, but a moment's reflection will convince us that even in our day, beliefs remain which are closely allied to what all now agree in denominating superstitions. To illustrate, let us glance at some cherished ideas still retained, —concepts long since proved by Christian Science to be as erroneous as the most ludicrous of ancient traditions. It is thought by very many that a draft of sweet, pure air can give one neuralgic pains ; that to wet the feet with the shoes on may result fatally ; that a disease manifesting itself on one body, can transfer itself to another; that the delicate perfume of a rose can cause great physical distress, etc. Apropos of this last, a story is told of a woman who suffered greatly each summer from rose-cold. Her family physician, finding his remedies unavailing, put an artificial rose in a conspicuous place and awaited the arrival of his patient. Scarcely had she entered when she saw the flower, and casting a reproachful look at the doctor, she conscientiously began to sneeze and cough. Her suffering was very real to her until the physician suggested that she smell the rose, whereupon she discovered her mistake and her trouble vanished forthwith. 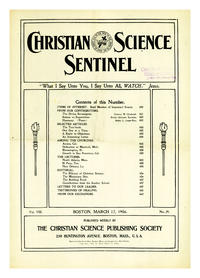