Robert Watchorn, the recently appointed Commissioner of Immigration at Ellis Island, New York Harbor, came to this country in 1879 as an immigrant himself. For many years Mr. Watchorn has been interested in the immigration problem. After spending four years as State Factory Inspector of Pennsylvania, he was appointed an inspector of immigration at Ellis Island in 1895. As such he made himself prominent by his activity and intelligence, being sent to Mexico and Europe to observe the situation and making valuable reports on the evasion of the immigration laws. Learning that thousands of immigrants were making their way into this country illegally from Canada, he was sent there, and developed a system that broke up the process.

On the ground that their business is fraudulent, pseudo-medical concerns in a number of cities, advertising extensively to effect remarkable cures, have been barred from the mails by fraud orders issued by Postmaster-General Cortelyou. By the terms of the fraud order the concerns against whom it is issued can receive none of the mail addressed to them, and cannot even receive money orders made payable to them. Their letters are returned to the senders marked "fraudulent" wherever the sender's address appears upon the envelope, and in all other cases they are sent to the Dead Letter Office. 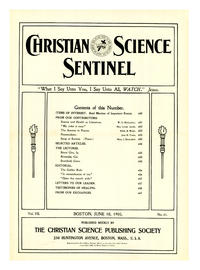