Much is said in the public prints, from the pulpits, and in direct conversation with Christian Scientists, to the effect that those who are trying to live this new-old religion of healing and happiness are "followers of Mrs. Eddy," and the statement often takes the form of a scornful accusation instead of a plain statement of fact, carrying with it the thought that to be thus designated was something not desirable, but rather to be avoided.

In this day there are few in the ranks of Science who would not willingly bear whatever opprobrium such a statement might seem to cast upon them, for publicly and privately the loyal Scientist is proud to be characterized as a "follower of Mrs. Eddy." Those who have accepted Christian Science and have tried to demonstrate it, willingly admit that they are "followers of Mrs. Eddy," although forced to admit that they are following a long way behind their Leader. 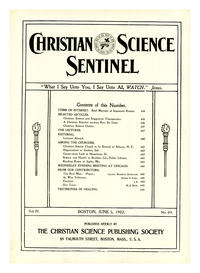