Senseless Jokes.—The engagement of a number of young women to go to the Philippines to act as amanuenses and typewriters starts the usual senseless joke about the pretty typewriter. The standard subjects for those who are jocularly disposed, are lawyers, doctors, stepmothers, mothers-in-law, and typewriters. As an exchange says about these young women, if the jests have any truth in them they are not funny. If they are not found on truth, they are cruel. Many modest, self-sacrificing, and self-respecting young women, earning their own living and contributing to the support of widowed mothers and young children, are grieved and humiliated by finding the class to which they belong made sport of at the expense of their reputation for ladylike conduct. The boast of the American citizen is that a woman can travel from Bangor to San Francisco, not only without danger of insult, but sure of protection in any emergency while on her way. In no country in the world has such liberty been given to women, and nowhere else have they shown that they richly deserve the trust that has been put in them—Christian Register.

The enormous increase in the productive capacity of American shoe manufactories, due to the revolution wrought by labor-saving machinery; the rapid development of the industry in the middle and Western States, and the large number of new factories, many of large size and fitted out with the best modern machinery, has made the supply of shoes in America far ahead of the demands of this country. With characteristic enterprise Americans have sought foreign markets for their surplus product, and this market has grown so rapidly that instead of American manufacturers having to imitate the style of other countries in order to gain a foothold there, foreign manufacturers have been forced to imitate American styles. 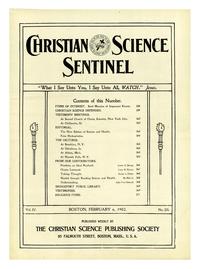