In his introduction President Schurman said that the religious thought of the new century must necessarily depend upon that of the last century. The change of religious thought during the last century has been most marked. The fact of the existence of a non-denominational university like Cornell is a striking evidence of such a change. The change has been from a dogmatic, uninquiring position at the beginning of the century to one of anxious questioning and perplexity at the close. 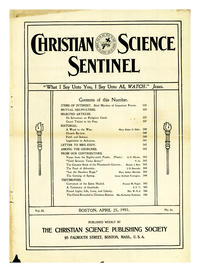