The National Anti-Imperialistic League held a liberty congress in Indianapolis last week, and passed resolutions recommending that all who opposed the policy of the present administration in regard to Porto Rico and the Philippines, give their support and their votes to Bryan and Stevenson. All the four hundred delegates, except twenty, voted for the resolutions. The committee which proposed the platform was composed of 7 men who in 1896 voted for Palmer and Buckner, the gold Democratic candidates, 10 who voted for McKinley, 7 who voted for Bryan, and one who did not vote. The committee was unanimous.

A race riot of extent and violence almost equaling the recent riot in New Orleans, raged for two days last week in the heart of New York City. Colored people, where-ever found, were attacked by the mob without mercy. To stop the disturbance the police raided the streets, severely drubbing every one who did not move quickly. The measures taken to quell the riot were severe, but successful. 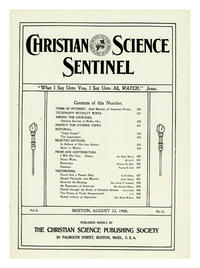