Every time some one dies of an incurable disease who has pinned his faith on Christian Science the opponents of that cult put on their war paint and strike out vigorously. When some one dies who has pinned his faith on doctors there is an opportunity for the other side to use the same kind of argument and invective. Such cases, however, do not carry any weight against Scientists or the doctors, and ought not to be dragged in.—Gazette, Taunton, Mass. 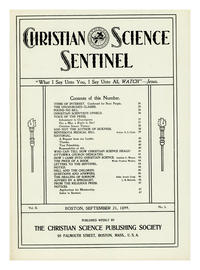