with contributions from A Truth-Seeker, C. S. Carr

To the Editor of the Sun. Sir:—An article entitled "A Dangerous Cult," appeared prominently in The Sun of Sunday, November 20. I am not a Christian Scientist, a condition I regret and hope to correct, and I may be wrong in attempting to reply to it. I shall, happily, be protected from making any serious errors, since I know that there is much I do not know.

What I do know may be briefly but broadly stated. If an intellectual man, a believer in the Bible, will diligently, for a space of say six months, not six minutes, study the methods, aims, authorizations, and foundations of Christian Science he will find an ennobling Christianity, not for Sunday alone, but for every day and all day; not for the rich, but for those who desire to be good, and only for those, be they rich or poor; not for the sinning alone, but for the sick also; not for those who want a heaven hereafter, but for those who want it here and now—a Christianity which daily and hourly demands of its followers honesty, sobriety, and purity in every thought and deed, out of the church and in it, sleeping and waking. All of this and much more the student will discover. At the termination of that period, should he decide against Christian Science, he will also, yes, he must also, throw away his Bible and give that up forever, for Science is the mathematically demonstrable explanation of Christ and His works, and the only one. 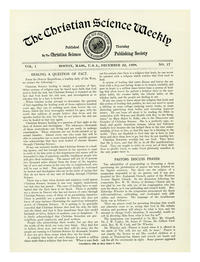