It’s easy to find on the internet references to the negative effects of hate and the positive effects of forgiveness. What’s not so easy is to keep ourselves from hate or find a way to forgive. That’s where prayer and the prayerful study of the Bible and the Christian Science textbook, Science and Health with Key to the Scriptures by Mary Baker Eddy, are so helpful and healing.

Years ago, I had an instructive experience with hate and forgiveness. I was a young officer in the United States Navy aboard an aircraft carrier with my squadron. The days at sea between exercises became tedious, and the quality of my work suffered. At one point, my superior officer noted this and decided to discipline me in front of other officers in our ready room. I stood at attention, took my dressing down, saluted, said “Aye, aye, sir,” and left the room feeling humiliated.

I went to my cabin, where I proceeded to nurture a self-justified anger, even hatred, toward this officer for publicly humiliating me. It felt so good to hate this man. This went on for a day or two before I came down with a heavy cold that kept me in my cabin away from others. That did not feel so good.

I had been brought up attending Christian Science Sunday School, and I regularly studied the weekly Bible Lessons from the Christian Science Quarterly, which consist of citations from the Bible and Science and Health, the dual pastor of the Church of Christ, Scientist. Now I turned to these books in my discomfort.

The unfolding love of divine Love, God, in that week’s Bible Lesson touched me. I don’t recall what the subject was or any particular citations. I do recall experiencing a change of heart and mind. I could now see that this officer was also a child of God and that he had been doing his duty in correcting my performance. I humbly admitted that I had not performed well and could do better. I resolved to do better and forgave the officer. The illness soon disappeared.

Some months later, we returned to the US from that cruise and had an administrative inspection by my squadron’s officers. I received both good marks for my work and the appreciation of my superior officer. But more importantly, I had learned the futility of hate and experienced its negative effects. I had learned the power of humble forgiveness and its effects in improved health and performance. Prayer was shown to be an efficient, effective way to find peace, health, and progress, and this has been proven repeatedly—in career decisions, relationships, and physical healing—in my life since then. 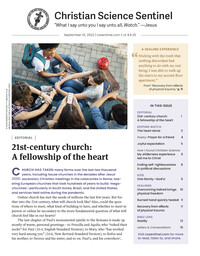