What the world needs now: Church

On June 13, 1905, as the Russo-Japanese war raged, Mary Baker Eddy sent an unusual request to church members. Published four days later in the Sentinel, it read: “Dearly Beloved:—I request that every member of The Mother Church of Christ, Scientist, in Boston, pray each day for the amicable settlement of the war between Russia and Japan; and pray that God bless that great nation and those islands of the sea with peace and prosperity” (The First Church of Christ, Scientist, and Miscellany, p. 279).

By that point, the conflict had gone on for well over a year with huge casualties. Yet, Mrs. Eddy, who frequently demonstrated the power of prayer to heal problems on an individual level, including disabilities, disease, and mental illness, had a conviction that the prayers of Christian Scientists could also be a specific help on a larger scale. This help could come not just through individuals, but by way of a collective—the healing power of Church. 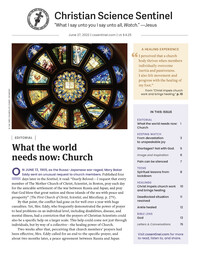