It was a Sunday morning, and I was preparing to teach my high-school-aged Christian Science Sunday School class. It was also the third day of being in pain from a toothache. I was discouraged and couldn’t stop focusing on the pain. But then I remembered two testimonies of healed tooth problems that I had heard, one on a Sentinel Radio program and another at a Wednesday testimony meeting at church (the latter was published in The Christian Science Journal; see Kenneth E. Bemis, “Not subject to decay,” April 2006). These testimonies encouraged me and gave me hope that I too could be healed.

Somehow, over the years I had accepted the notion that tooth problems were beyond my ability to heal through spiritual means, and I had relied only on a dentist. But I also remembered Jesus’ words “With God all things are possible” (Mark 10:27). So, that morning, I called a Christian Science practitioner to give me Christian Science treatment through prayer. We had a very short conversation—I don’t even remember any specific words the practitioner used—but immediately I felt a beautiful uplift. 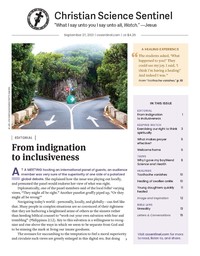