Safe on the school bus

Every morning before Greg left to ride the school bus, he and his mom did something special. They played the piano and sang a hymn from the Christian Science Hymnal. Their favorite starts out this way:

Through the love of God our Saviour
All will be well;
Free and changeless is His favor;
All must be well;
Precious is the Love that healed us,
Perfect is the grace that sealed us,
Strong the hand stretched forth to shield us;
All, all is well.

They liked the idea of being sealed by God’s grace. Greg’s mom would remind him that nothing bad could ever touch him because he is always one with God. Greg was sealed in God’s goodness, never out of God’s care.

Then out the door he would go!

But then he remembered the hymn he and his mom liked to sing. He remembered that he was sealed in God’s goodness and that God was right there with him. He was safe no matter where he was.

The girl who was sitting next to him started to talk to him. Her name was Mindy. He said his name was Greg, and he told her he was on the wrong bus and wasn’t sure how to get home.

Greg got off the bus and went to Mindy’s house. He knew his mom’s phone number, so they could call her. Greg’s mom was so happy to hear from him and said she would drive right over and pick him up.

Greg was excited to see his mom. He was also excited to tell her how he’d prayed on the bus. He’d gotten to see proof that he really was always safe in God’s care. 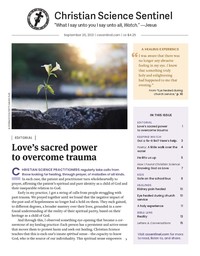