“The scientific statement of being” found in the Christian Science textbook, Science and Health with Key to the Scriptures by Mary Baker Eddy (p. 468), offers such a strong and positive declaration of our spiritual identity. This inspiring and healing statement is so pertinent to life that Mrs. Eddy, who discovered Christian Science, included it as an essential part of the Sunday service held in Churches of Christ, Scientist, and we can also turn to it for meeting our daily needs.

About a year ago I had a quick but meaningful demonstration of God’s ever-presence. After toasting some slices of bread under the broiler, I removed the pan, wearing an oven mitt on one hand, and set it on the stove. I saw that I had placed the pan directly on a burner that I had previously used but not yet turned off, which was glowing red. Without thinking, I picked up the pan with my other hand, which was ungloved, and immediately realized my mistake. I dropped the pan, turned off the burner, and turned to God in prayer. 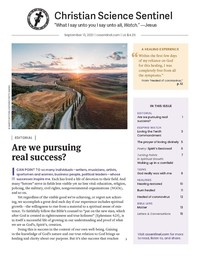