For me, forgiveness was a gradual process helped by my study of the Bible and the writings of Mary Baker Eddy.

I grew up in Northern Ireland, part of a Protestant community that harbored a long-standing negative view of Roman Catholics. So I started life with a distorted view of my Catholic neighbors. 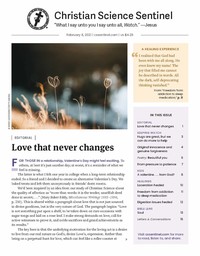