I pulled up to the toll booth and held out my money. But instead of taking it, the toll booth operator nodded toward the car ahead of me and said, “Go ahead; that car paid for you.” Seeing my puzzled look, he added, “People do that sometimes.” Later, when I came back through, I paid for the car behind me. Those two simple acts of generosity gave me a feeling of peace and well-being.

Yes, that’s a sweet story. But it’s also much more than that. I’ve found that it’s important to acknowledge that generosity is not just a human act of largess; it is a powerful law of God based upon, and radiating out from, the infinite nature of God’s, divine Love’s, being and provision. In the Christian Science textbook, Science and Health with Key to the Scriptures, Mary Baker Eddy refers to God as “the infinite,” who cannot “do less than bestow all good, since He is unchanging wisdom and Love” (p. 2). Elsewhere, she refers to God as “the great Giver,” who is “ ‘the same yesterday, and to-day, and forever’ ” (p. 112).

Send a comment to the editors
NEXT IN THIS ISSUE
Article
Got joy? 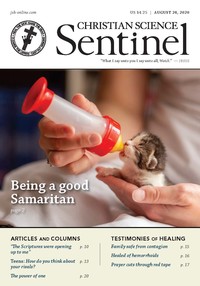