Last year, in July I spent a few days in the United States at a camp for young Christian Scientists. I went with a group of Christian Science Sunday School students from my city, Rio de Janeiro, and from other Brazilian states, such as São Paulo and Acre, and three adult companions, also from Brazil.

I thought the Brazilians would be staying together, maybe divided into two groups, but I ended up staying in a cabin with four people from other countries, including our cabin leader, and I was the only Brazilian there. Due to my age, I ended up being separated from my traveling companions, because at that camp the cabins are assigned according to age. 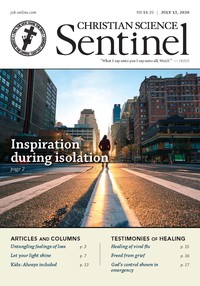