My parents were introduced to Christian Science many decades ago when a relative convinced them to engage a Christian Science practitioner to pray for me, their infant daughter. Doctors had told them that I would not survive a natal illness, but I was instantaneously healed during the practitioner’s visit. My parents immediately became devoted students of Christian Science. When I was old enough, I was enrolled in the Christian Science Sunday School, and I attended Wednesday testimony meetings with my parents as I grew. Consequently, I’ve had many opportunities to hear people share their healing experiences, and I’ve had proof throughout my life of the harmonizing power of the Science of Christ, the truth that Jesus came to demonstrate and teach.

I’m especially grateful for a recent healing that resulted from a change of “altitude,” or spiritual awareness. Last summer my neck and shoulders broke out in a rash that my hairdresser thought was caused by a product she was using on me. She knows I rely on God for healing, and I have shared comforting Christian Science periodicals with her when she herself has had challenges, so she did not pressure me to have medical attention. But each week she expressed concern about the skin condition, and I became anxious about how to respond. 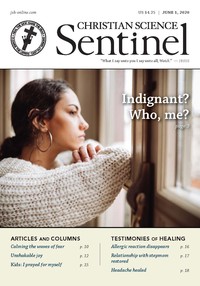