My eighteen-year-old son, Chris, was in the basement working out with a boxing bag with some of his friends when I heard him yell in pain and run upstairs, saying that he had dislocated his finger. Apparently, he hadn’t wrapped his fingers before hitting the bag, as recommended.

Chris has attended Christian Science Sunday School since he was little and has had many healings through prayer. I asked him what he wanted to do about his finger, and he said he wanted to go to an emergency clinic for X-rays. I told him to go upstairs and change and then I would take him. One of his friends, who is also a Christian Scientist, said that we should pray for him, and I know we all did.

Send a comment to the editors
NEXT IN THIS ISSUE
Image and Inspiration
'We have nothing to fear when Love is ...' 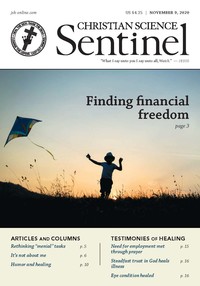