Out of darkness into light

Reading Barbara Brown Taylor’s book Learning to Walk in the Dark, I was struck by her description of a “full solar spirituality.” She says it’s the reason Christianity today loses followers—it loves to bask in the light of God 24/7. But when darkness falls, such as loss of a job, a marriage ending, or a child acting out in some attention-getting way, the church says only that with enough faith, things will turn around. And if they don’t? “… sooner or later it will be made explicit for you: the darkness is your own fault, because you do not have enough faith.”

She says this verdict isn’t intended to be mean. But Christianity that focuses only on the sunny side of things just isn’t enough. We need tools to navigate the dark things.

Send a comment to the editors
NEXT IN THIS ISSUE
Bible Lens
Bible Lens—August 26–September 1, 2019 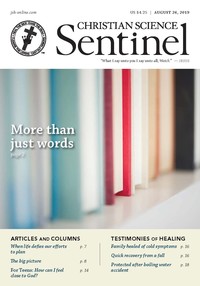