I had just gotten off a commuter train from a major city to walk to where I had parked my car. Out of the blue, a man came up behind me, took me by the arm, and said, “You’re coming with me.” It was late afternoon, but still light. Had this man seen me there before? I don’t know. He didn’t have a police uniform on and was a complete stranger to me. It all happened so fast. I felt confused, frightened. I didn’t know what was going on or what to do. We went a short distance; then he drifted away. I hurried to my car, quite shaken. I don’t recall praying during the few minutes this was taking place, but, oh, how I thanked God when I got safely into my car.

The moment I came in the front door, I called my husband at his office and told him what had just happened. We were so grateful and relieved that I was home safe and unharmed. 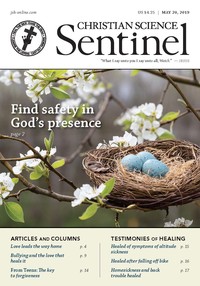