It was a beautiful spring morning, and my husband and I were on our way to church, where I was to teach Sunday School. That morning a number of roads surrounding our church were blocked off and the traffic rerouted because of a marathon that was being held in our city.

After following a particularly circuitous route, I realized that if I could just make a U-turn, I would be past all the barriers and road closings and would have a clear path to the church, which was just a few blocks away. I didn’t see any prohibiting signs. As I made the U-turn, however, a police siren went off, and with lights flashing, a police car pulled me over. A very agitated and angry police officer came up to our car. She asked me if I knew how dangerous that U-turn had been, indicating that I’d put marathon runners and onlookers in harm’s way. I looked around. There was no one in view. Not a single pedestrian or runner, and no other cars. The race had not yet reached where we were, and there was no indication that it would be there any time soon. 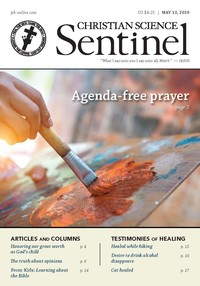