Are you struggling or striving?

I had always thought of struggling and striving as more or less the same thing. So when both words appeared in differing contexts within the same week’s Bible Lesson-Sermon found in the Christian Science Quarterly, I was intrigued. Although there are similarities, struggling can suggest needing to be free of restraint or working against something, while striving seems to more often indicate efforts toward a goal or working for something. Understanding that difference can have a healing effect.

Years ago I found myself complaining about a coworker who seemed frequently outraged. A friend gently took me aside and related this little parable: Two men were about to run a race. One of them was deeply troubled, while the other was not. The sound of a bell started the event. When the bell rang again, they stopped running, and their distances from the starting point were measured. The results were that the untroubled man had easily covered five miles, while the other man had run just a few feet.

Send a comment to the editors
NEXT IN THIS ISSUE
Article
Instead of reacting, choose to pray—and bring healing 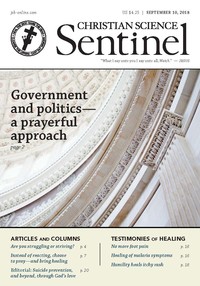