One of the greater impositions facing mankind on a daily basis is the belief that life is finite and death is inevitable. Daily news reports usually include incidents that involve loss of human life. In our own lives we might face the loss of a loved one or interact with someone who has experienced such a loss. In these times, the range of emotions may include shock, grief, or loneliness. People tend to deal with these emotions differently based on their own beliefs about death and what occurs after death.

The problem of death—and the solution to this problem—is best understood through the teachings of Christ Jesus. Not only did Jesus raise others from the grave, but he also overcame it for himself. Before his crucifixion, he explained to his disciples that three days after it occurred he would be resurrected. Based on accounts in the Gospel of John, it seems his disciples didn’t understand what that meant, for following his crucifixion they returned to their former occupations. And Mary Magdalene, when she returned to the sepulchre and saw Jesus, did not at first recognize him.

Send a comment to the editors
NEXT IN THIS ISSUE
Article
Who is my family? 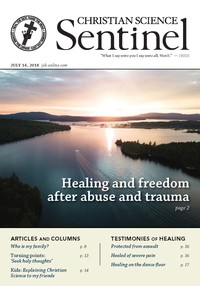