‘I wanted to serve God’

It was the early 1990s, and I was living in Paris. I had been praying for many years to find a religion that would help me learn about God. I wanted to serve God, but a God I could know and understand.

Send a comment to the editors
NEXT IN THIS ISSUE
Teens
Self-doubt: Exit stage right 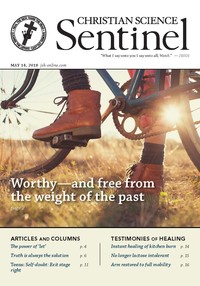