No conflict in God’s kingdom

Not long ago, a situation came up in which I was convinced I had the right plan of action. The trouble was that my friend also had “the right plan,” but it was different from mine. However, just when it looked as if conflicting opinions might lead us into an argument, I remembered something I had learned in my study of Christian Science—that God, who is infinite, all-knowing Mind, is the only true source of thought, and Mind’s ideas can never conflict with each other.

In the human sense of things, there seem to be many finite minds, each with its own perspective and self-interest. But if divine Mind is in fact the only true intelligence, then everything that truly exists, including man (meaning everyone), is an idea in this one Mind, and reflects God’s thoughts. 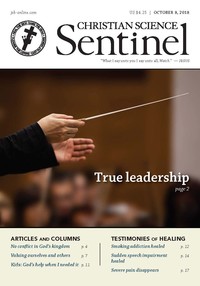