Love to the rescue

The events surrounding this past summer’s rescue of members of a Thailand soccer team and their assistant coach captured attention around the world. And what jubilation there was as they were methodically, skillfully, and patiently escorted a few at a time out of that deep network of flooded caves by expert divers over a period of three days. There had been serious concerns that there were no safe options for getting them out as forecasts of more rain threatened to raise the water levels still higher. People everywhere were praying, many feeling that they could look to God, the Supreme Being, for help. As the clock ticked, teams of professional divers and experts came from many parts of the world, resources poured in, and solutions began to emerge. And when those boys were finally out of the cave—asking for fried chicken, chocolate, and other favorite foods—the global family smiled and rejoiced together.

The rescue provides a vivid illustration that inspires hope for any of us who find ourselves stuck in a dark place of our own—such as a pit of loneliness or depression—or boxed in to a set of circumstances with a job, physical issue, or relationship where we just can’t see a way out. As hopelessly trapped as we may appear to be, there is hope offered by understanding more about the nature of divine Love. In fact, God—omnipresent, omnipotent Love—is sending a “rescue team” of spiritual ideas to save us. 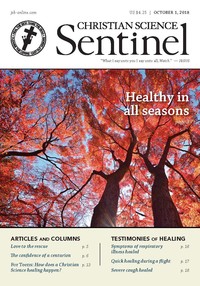