Two commandments that changed my life

In 1944, a series of physical exams for enlistment in the United States Armed Forces consistently indicated I had contracted tuberculosis. I was labeled “4-F”—unfit for military service. It was quite a wake-up call.

We lived two blocks from The Mother Church, The First Church of Christ, Scientist, in Boston. My parents had placed me in its Sunday School, but I hadn’t appreciated that opportunity and had eventually dropped out. Now I was being told by doctors to go to a sanatorium, get lots of bed rest, and try not to overexert myself.

Send a comment to the editors
NEXT IN THIS ISSUE
Kids
I was all better! 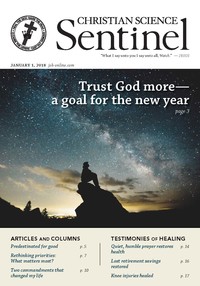