‘Divine Love, show me how to go’

In a product-driven and results-driven society, it’s tempting to focus only on the destination—as they say—instead of the journey. Sometimes even in my spiritual practice, I’ve discovered how easy it is to slip into focusing on the end result rather than how I’m going along. I learned a big lesson on the difference between the two through Christian Science not long ago.

I had been hired by a local company to teach a six-part business writing workshop to its employees. The first class session was OK, but the atmosphere was more unsettled than other classes I’d taught in the past in other venues. I excused it by calling it an adjustment period, but by the end of the second class session, I was near tears. There didn’t seem to be any way of controlling the class. The adult students were using foul language, telling crude jokes, interrupting me, and were generally disrespectful. I was shaken. When the president of the company found out about it, I secretly hoped she’d dismiss me, but she didn’t. I would have to stick with the class and, I decided, work it out through prayer since I saw no other way. 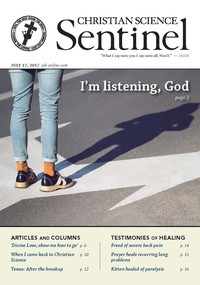